A busy week lies ahead as earnings season kicks off and June inflation figures for the US are released this Wednesday. These publications will act as a signpost for the economy, namely whether it is heading towards a recession or not and setting the tone that the Fed is likely to adopt in late July.

The release of minutes from the latest Fed meeting, the content of which was much as expected, did not trigger a nervous reaction from markets. Instead volatility emerged last week from the stronger-than-expected US job figures, which stoked fears of an even more hawkish rate policy from the Fed.

The report showed that 250,000 jobs were added in June, and the unemployment rate was again 3.6%. But the focal point for investors was wage growth, which stabilised at +0.3% month on month, reflecting the hope that inflation might be contained in its wage component and thus not add fuel to a runaway inflationary fire.

The strength of the labour market bolstered the assumption of a 0.75% tightening move on Fed Funds in July, triggering a spike in the yield on 10-year US Treasury bonds, although this subsequently retraced to 3.04%.

Oil prices fell on fears of recession and renewed public health restrictions in China, which outweighed supply-side tensions. Several major Chinese cities are now under lockdown after the detection of a new variant, while Shanghai is preparing for a massive testing campaign in the days ahead. This worrying pandemic-related news from China has added to the market jitters as half-year results are reported this week along with inflation figures, which as stated above are likely to dictate the Fed’s tone and show where the real economy is heading.

In Japan, the results of the partial Senate elections were announced in a subdued atmosphere, overshadowed by the assassination of the former premier Shinzo Abe at an election rally last week. Nevertheless, the victory of prime minister Fumio Kishda’s ruling coalition reinforces the stability of the government in place for the next three years, which hopes to attract fresh foreign capital.

Until recently, margins were close to all-time highs, meaning that companies had been successful in passing on some of their rising costs to consumers. However, the results for the second quarter look gloomier as the economy loses traction.

With margin resilience in question, analysts are one by one revising their forecasts. In recent weeks, ninety-three S&P 500 companies have been hit by downward revisions to earnings estimates. Not all sectors are equal in the face of these revisions. Projections for energy and materials sectors have actually improved.

The risk of earnings upsets is greater for Europe than the US because of differing index compositions. Europe, which has more financials and cyclicals, faces the threat of energy supply disruptions and is more exposed to the prospective downturn in the economic cycle.

Yet broker revisions always come with a time lag, and the market already seems to have priced in much of the future earnings slowdown. Even so, investors will continue to watch margins closely for a sign of a sharp change in direction, as this would signal that corporate pricing power is eroding. 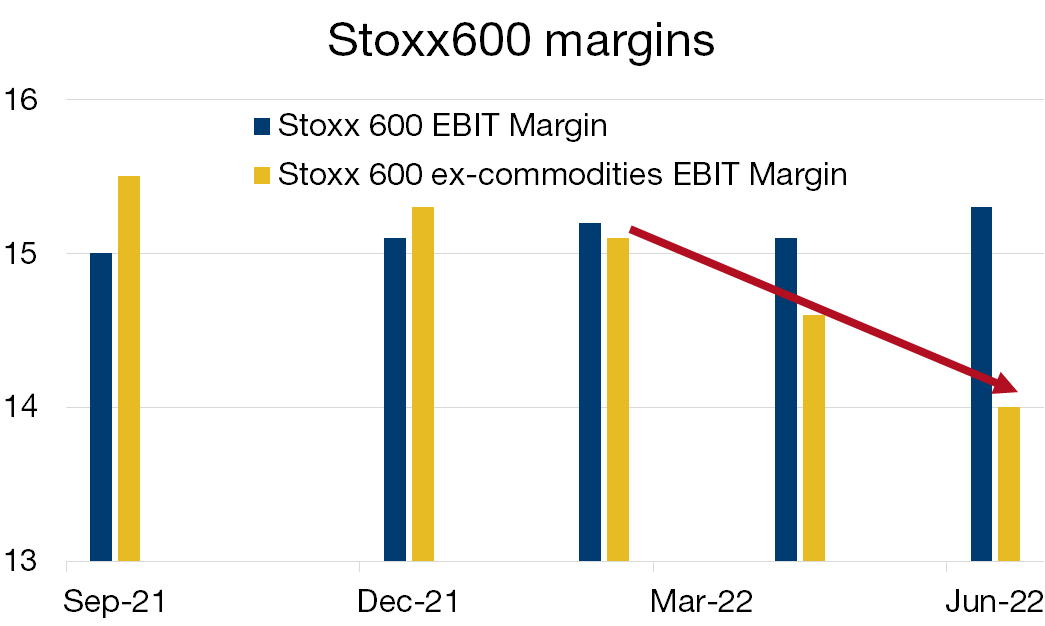 Supply chain disruptions and rising input and energy costs are squeezing corporate margins.
Click here to discuss with us